When you see ‘Tranum Strandgård’, lying there, shining white and bright on the edge of Jammerbugten (The Misery Bay) and the vast North Sea – then you may be thinking that you have arrived at the ‘End of the World’?

Far from Copenhagen, Hamburg, Gothenburg, Edinburgh or Viborg. Wherever you have travelled from.

But no, you have arrived at the ‘Beginning of the world’!

To and from here, there has always been a connection to the whole world and other, more exotic impressions. Be it north, south, east or west of here.

As in the strange name for the town, Tranum (home of the cranes), where the cranes still make a home on the meadows, south of the town, and with Fosdalen and Lien (these being local landmarks also having quite exotic names) both of which you can see from Strandgården.

Tranum has always attracted enthusiastic and creative people. This is a place of vision and creative space. This isn’t a place where you isolate yourself but rather, a place you interact and co-create.

Strandgården itself, is originally a starting point for commerce and goods transport at sea – directly from the beach.

The so-called ‘skudehandel’, which happened, more or less authorised, with southern Norway.

This business goes back a long way but had its heyday from the mid 16th century until the mid 17th century, only disrupted by The Napoleonic Wars, where the English were causing havoc all along the west coast of Jutland.

The so called ‘sandskuder’ were clinker-built boats, and the vessels could get as near to the coast as the quite similar viking-ships could in the shallow waters of the Jammerbugt. Agricultural goods going to Norway and getting timber and iron from there.

The Møller family, here on Strandgården, had two such vessels and several generations benefited greatly from this. They even operated a brandy distillery on the premises!

The shipowners’ six stately gravestones can still be seen behind their cast iron fences, by Tranum church.

From then on, the Strandgården operated as a grocery store and from the 1870’s as a farmstead.

The ‘Strandgården Gallery is now housed in the original cowshed.

The farm was taken over by the state in 1950 and then by the former Brovst municipality in 1998.

And that could have been the end of that.

But someone had other ideas.

Tranum and the surrounding area, is known to attract a wealth of artists and others, with equally strange interests and talents. Some of them developed the idea of a Centre for Culture in the area. And, at the Town Hall, thoughts of similar ideas, to attract  some ‘cultural tourism’, were taking place.

After several years of effort, they had been able to raise funds from the EU, state and region of Nordjylland for an extensive remodelling.

lee wall (shelter wall). However, the ”cowshed” was extended with a special artist housing.

The old barn, by the road, was totally renovated in 2012 and is now rented out as studios and workshops to artists and course participants.

The Association has two flats at its disposal, that visiting artists can rent for shorter periods. This has proven a very sought after opportunity, from as far afield as Australia!

In 2017, the local art group ‘Silikone’ moved into the main house, with a permanent studio and art gallery.

The old, eye catching wooden hay barn, north of the Farm – and additional ‘twin’ building was later added – is also used for various activities, even if it’s simply eating your packed lunch there, which you are more than welcome to do.

Students from Tranum School, have gradually decorated the hay barn as well as the old, 40meter long ‘manure-wall’ west of the Farm.

The building is still owned by the municipality.

However, the activities taking place are arranged, independently, by the volunteers from the Tranum Strandgårds Venner.

and 5-6 concerts in the exhibition building as well as a big, partly outdoor, arts and crafts market. Furthermore, in the workshop building by the road, they run various arts and craft courses, throughout the year.

We have proudly and ambitiously formulated our goal, our mission statement if you like, for Tranum Strandgård Art and Culture centre to be “The cultural lighthouse of Jammerbugten” – far-reaching, here at the Beginning of the World.

Strandgaard’s own anthem, – written in connection with the inauguration of Tranum Strandgård Art and Culture Center in 2008. Gert Bach wrote the anthem after living at Strandgården for 3 years, a time when he also composed several Danish songs. The inspiration is thus completely natural from the area and Strandgården.

Remember to renew your membership for 2021

– or do you want to become a member of ‘Tranum Strandgårds Venner’.

Thank you in advance for your support.

You will find us here 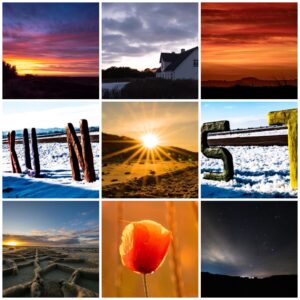 ”…. surroundings at Strandgården, an endless source of inspiration”